Gather ’round, dear children, and listen to the wondrous story of how 2015 went out with a whimper (and by whimper, I mean several colorful metaphor filled screams).  Join me, now in the Wayback Machine, as we travel to the long ago day of 12/30/2015…

(I know it’s a crazy long time ago, but just bear with me…)

December 30th was not a fantastic day.  We were short staffed, and I found myself attempting to be 2.5 people.  Since Kamino has all of my clones on backorder, being 2.5 people proved to be a little impossible.  However, I was determined to prove that I could do it all, and be absolutely awesome in the process.

Not quite three hours into my shift, I found myself needing to be in two separate rooms at the same time.  I thought that if I just walked a little faster than normal, I could take care of the problem in room B, and get back to room A  without an absurd amount of time passing.  As I power-walked around a corner, I lost my footing.  I went down, hard, and as I went down, I felt my shoe go flying off my foot.  Before it completely came off, the edge of it caught around one of my toes and twisted.  I felt something pop, but I didn’t have time to stop and deal.  Grabbing my shoe, I stood up, tried to take a step, and promptly decided that walking is completely overrated.  Hobbling the twenty feet back to room A, I became worried that I had broken my toe.

Because it was a workplace accident, after I completed a pile (translation: two pages) of paperwork I found myself at the doctor’s office.  The doctor’s office my work sends people to is a facility that deals with workplace accidents and pre-employment drug screens.  I sat in the waiting room, surrounded by a lot of people who really needed to pee.

After the doctor took a look at my toe, he sent in a nurse to take me to get x-rays.  I was in a shockingly severe amount of pain, and at a point that I really couldn’t put any weight on my foot without wanting to scream.  I asked the nurse if it would be okay if I hopped on one foot to the x-ray suite.  Fortunately, the x-ray suite was only two doors down.  Unfortunately, it was all in full view of the entire waiting room.  I’m sincerely hoping that the sight of me hoping on one foot brightened the day of those 30-ish people.

The good news?  I didn’t break my toe.  The bad news?  I sprained it, and nearly two weeks later it still hurts quite a bit.  (Also, as someone who tries to avoid going to the doctor, this is by far the most ridiculous reason I have ever found myself at the doctor.) I had no idea a sprain could hurt this bad.  Probably doesn’t help that I’m super clumsy and have managed to bash my injured toe into something almost every single day.  The boy has pretty much stopped asking, “What did you do now?” and now-when he hears me scream-just says, “Awe, babe…” while shaking his head.

And that concludes the story of how my toe is teaching me to slow down and just try to be me (not me and 1.5 other versions of me). 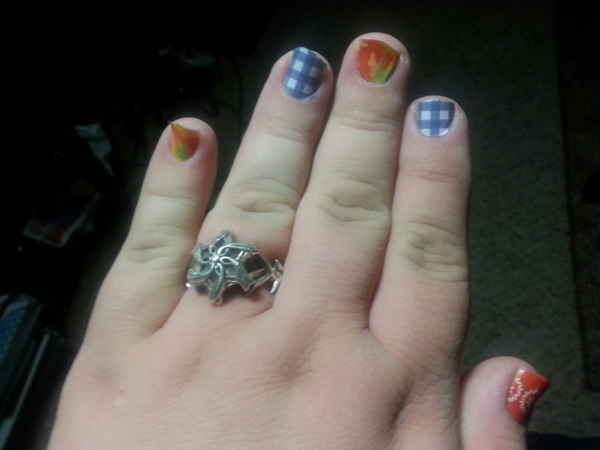 One day late, but here’s my “Welcome Fall” nails!

It’s the last day of summer and I thought the perfect way to celebrate the end of a summer filled with car trouble would be to have my brakes completely go out.  Okay, they’re not completely gone…yet…  I’m sure in some parallel dimension they’re working absolutely perfectly, but this dimension saw me driving to work this morning, scared to death, wanting to cry every time I rolled through an intersection.   You never realize how many lights there are on your daily commute until you find yourself unable to stop and praying, “Lord, don’t let anyone hit me, and PLEASE don’t let me hit anyone.”  Let me just say, I am super thankful that I don’t work nights anymore.  Going to work in the early morning means minimal traffic to deal with.

It’s hard to believe that the summer is at an end.  This year is just going by too fast.  I know when I was little I always found it funny when adults would talk about time going quickly, or something happening not long ago (15-30 years is apparently not long ago to old people).  Time passing quickly is one of the things I truly dislike about getting older.

You know what else goes quickly the older you get?  The flavor in gum.  When I was little, I could chew a piece of gum for hours before it lost it’s taste.  Now, I’m lucky if the flavor lasts more than thirty minutes.  Is it just me, or is gum less high quality these days?  Plus, to get any decent bubble blowing done, you have to chew 4-5 pieces.  That’s just wrong.  And yes, I’m almost 31 and I still blow bubbles (soap and gum).