I had an interesting conversation today.  I was spent the afternoon with my best friend and her beautiful baby, while her husband met with his guy’s group.  After the group finished, my friend and her hubby gave me a ride home.  During the ride, my friend was sitting in the front while her husband drove, and I was in the back with the baby.  My friend said something to me about my being the baby’s aunt.  This prompted her hubby to ask me if it was odd (not exact wording, but I’m forgetting the word he used) for me to be baby’s aunt when I’m not biologically related to baby.  I told him, no,because there is the possibility that this is my only shot at being an aunty.

I’m an only child, and single as single can be.  It was so special to me when my friend called  last fall to tell me that I was going to be an aunt.  She has a few more brother’s and sister’s than I do, so it’s not like baby girl would be without aunts and uncles.  Still, to be an honorary aunt means so very much to me.

Now, a baby is no little thing, but this conversation got me to thinking about the things in my life that I cherish that other’s might scoff at.  Things like Grampa’s golf marker.

A few weeks ago, my grandfather passed away.  It was a bittersweet passing.  He’d been in such bad shape, and had fought for each day for so long, it was a comfort to know that he wasn’t miserable anymore.  We had the funeral, and the following day we (mom and I) went through some of Grampa’s things that my aunt hadn’t dealt with yet.  (My aunt is seriously amazing.  She’s been an absolute rock throughout this whole ordeal.  I wish people could know how amazing she is.)  Anyway, while going through stuff, I found this: 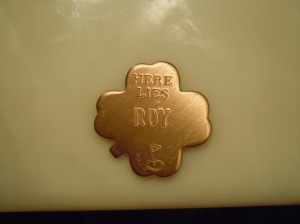 The little things.  Finding contentment in the life you’ve got, even when you can’t do or have that which you want.