Today I headed back to ND, picking up my friend in Sioux City.  The wind was terrible, but I could deal with it.  Plus, before I left Omaha, I checked all the road reports and weather, and everything was saying it was all okay.  When we got to Sioux Falls, there was some snow that was blowing across the road, but it wasn’t too terrible, and I decided to push on to Brookings (about 40 miles north).  The blowing snow progressively got worse, and I ended up driving slower and slower.  I should have pulled off at the Casino exit, but we were only about 12-15 miles from Brookings and I thought we could make it.  I don’t know what happened, we were driving slow, and suddenly I felt the van sliding sideways and we ended up gliding off into the ditch.  Honestly, if we had to go in the ditch, it could’ve been a million times worse.  We went so slow and just glided and didn’t roll the vehicle.

I tried to dig the van out and poured the kitty litter and did all the things that you’re supposed to do to get unstuck and back on the road.  Nothing worked.  We were stuck.  I called 9-1-1, and I regretted it.  The South Dakota 9-1-1 dispatchers was incredibly rude and this was basically the conversation:

Me: Our vehicle went off the road and we’re stuck in a ditch and need help.

Dispatcher: Where are you at?

Dispatcher: What county are you in?

Me: I have no idea, I’m not from around here.

Dispatcher: Let me transfer you to the sheriff’s department.

I was then transferred to the sheriff’s department.

Sheriff’s dispatcher: What county are you in (Listing off two county names I didn’t even recognize)?

Sheriff’s dispatcher: Well, is anybody injured?

Sheriff’s dispatcher: Well, there’s a lot of people that have gone off the road, so someone will get there at some point.

And that was the whole of the conversation.  I understand that their department was under quite a bit of stress, but there was no reason to treat a scared girl who was asking for help like they’re just causing a problem.

Fortunately, people from Katy’s company were passing by and able to pick us up.  My car is currently stranded south of Brookings, but we’re safe.  In case anyone’s wondering what the roads looked like, here’s some pictures! 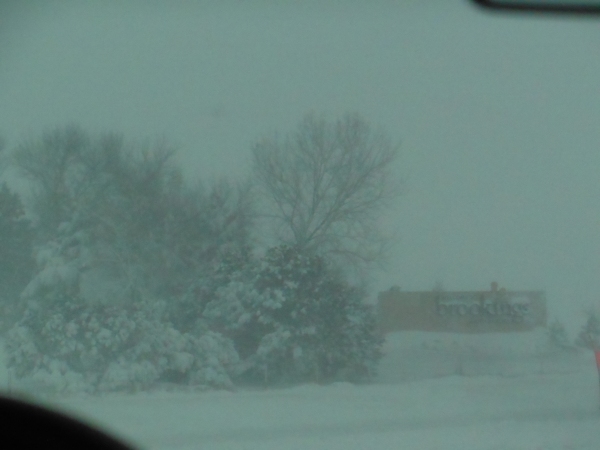 I really wish that these pictures weren’t accurate, but that’s really how bad it looked.